The cultivated vine, like the olive tree, arrived in Provence with the foundation of Massalia by Greek merchant sailors from Phocée between 620 and 600 BC. J.C. The wedding of Euxenos the head of the Greek colonists, with Petta the daughter of the king of the Segobriges, the Celto-Ligurian people in place, seals the foundation.

Four centuries later, Rome will carry the culture of the vine in its conquest of what will become the Provincia Romana, Provence, until reaching the capital of the Gaules, Lyon, in 50 BC. Vitis Vinifera will have to wait another 120 years before reaching Bordeaux in 70 AD. J.-C.

The vine will thrive in Provence until the fall of the Western Roman Empire in 476 AD. J.C., Euric, king of the Visigoths, then conquered Marseilles and the South of Gaul. The first monasteries, which were created before the end of Rome in 417 in the Iles de Lérins (Honorat d'Arles) and in 418 Saint-Victor in Marseille (Jean Cassien), became the protectors of the wine tradition during the Middle Ages. The Visigoths and Ostrogoths will tolerate the power of the bishops and the Gallo-Roman aristocracy in place ensuring the continuity of the vineyards and the attached ancestral know-how, then with the Merovingians and the Carolingians, catholics, the existing social order is maintained, the landed aristocracy and the church kept developing viticulture, motivated by their main duty of hospitality and prestige.

The monks in their infinite wisdom and their not less great application to tasting, which was authorized daily, played a primordial role in the transmission and the refinement of viticulture. What is extraordinary is that this feedback loop action played by the monks has taken place over more than a millennium and the result defines what the vineyards of Burgundy are today.

When the Templars fell, under Philippe le Bel in 1307, the Templar commanderies returned to the "Order of Hospitallers of Saint John of Jerusalem", which would become the most powerful order of the Christian World. The estates were sold to large local families or remained in the Order which would later become the Order of Malta. During the revolution, these goods were confiscated and resold to notables who ensured the continuity of these large properties.

These estates became the prerogative of the great families and gave them a complementary title of nobility.

The 19th century, the age of vine diseases

The phylloxera will destroy the vineyard until its reappearance thanks to grafting on resistant american rootstocks at the beginning of the XXth century.

The renaissance of the vineyard

The wine appellations of Provence:

The technical progress brought by the control of cold in the cellar and the pneumatic pressing techniques allowed the quality of the rosés to improve materially in enhancing the organoleptic qualities of the rosés of Provence: delicate and aromatic wines with citrus aromas, grapefruit, red fruits, all with a nice refreshing fresh acidity. Color has also gained with the arrival of these techniques. The consumer is very sensitive to color as a prime character that can be appreciated even before opening the bottle. With this improvement in quality and the move upmarket that it enabled, rosé de Provence is experiencing a booming international demand, helped by the arrival in the region of global players who are becoming real ambassadors of rosé worldwide.

The Massif des Maures is a relic of the Hercynian chain dating from the Carboniferous period. It outcrops on the most beautiful parts of the Var coast from the islands of Embiez and Sanary to the west, to the islands of Hyères to the south and rises north-east along the Côte d'Azur to the valley of the Siagne in the immediate inland of Cannes. It is composed of weakly metamorphosed detrital sedimentary rocks, the Phyllades, in its western part. These Phyllades, flyschs, of Porquerolles for example, date from the Ordovician and the Silurian. They were deposited at the foot of the ancient northern oceanic margin of Gondwana in the Paleo-Tethys Ocean some 400 to 450 million years ago. Then, going east, the rocks are of a deeper origin within the mountain range and are composed of mica schists, gneiss then granite. These rocks give fairly clear, shaly and schisty soil in the sectors with gneiss and mica schists, to more sandy soils in the sectors with Phyllades, and arena sands in the granite sectors. 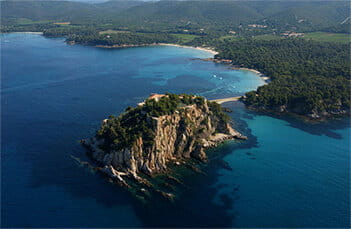 In the valley going north-east from Toulon to Le Muy, passing through Cuers, Le Luc, Vidauban, then with the Massif de l'Esterel, we find rocks of volcanic origin, red sandstones with some conglomerates, then the more or less reworked basalts and rhyolites of the Massif de l'Esterel. Everything dates from an episode of continental extension in the Permian. These rocks give dark to dark red siltstone and sandstone soils that are rather acidic and drain well. The terraces of the valley of Esclans with well drained sandstone and clay soils on slopes facing south east are among the best terroirs in the region. 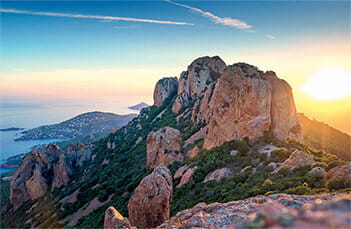 The limestones of Provence

They cover the north and west parts of Provence above the great Permian valley. They start with the limestones of the Triassic, wich are more or less dolomitized, of the central Var where limestone highs of the Jurassic like the Sainte Baume and the famous Sainte Victoire stand. Further west, we find the massive limestones of the Cretaceous, the blue marls of the Gargasian (Aptien, 120 MA) in the vineyards of Cassis, the rudist limestones of the Turonian (90 MA) and the clear sandy marls of the Santonian (85 MA). ). In the Alpilles, we find the vineyards between the limestone bars of the Lower Cretaceous. 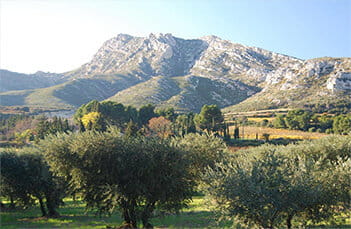 In the Luberon, the soils are of a more recent geological age, mainly from the Miocene. Above Nice, the vineyards of Bellet develop on a characteristic soil made up of a coarse conglomerate with a sandy-clay matrix, the work of reworking by the Var of the pre-Alpine reliefs upstream. 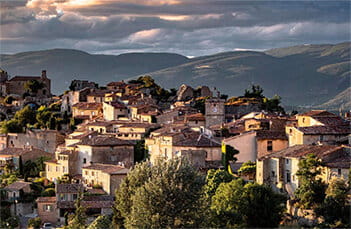 Typically Mediterranean grape from Spain, it is the main grape variety for red wines in the Rhône Valley and the rosés in Provence. It brings aromas of ripe red fruit, roundness, body and supple and slightly marked tanins. Red cherry aromas, strawberry, blackcurrant, black pepper and liquorice combined with a nice roundness and medium body give fullness on the palate, power and goloso appeal. Rosés take advantage of these gourmet aromas and light to fine tannins. 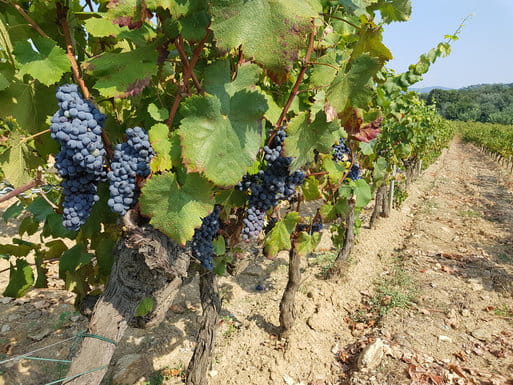 Originally from Provence where it still accompanies Grenache in rosés blent with other red grape varieties like Grenache, Syrah or Mourvèdre. It is very resistant to Drought. It brings fruit flavors to the blends with aromas of fresh red berries: gooseberry, wild strawberry; with suppleness and finesse often in very good accordance with the amplitude and the fruit of the Grenache. 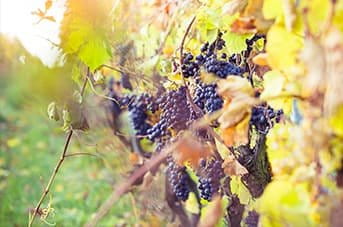 Originally from the north of the Rhône Valley, it is mainly vinified into red wine blended with Grenache, Mourvèdre and Cabernet Sauvignon. He develops aromas of red and black fruits, raspberry, blackberry, blueberry, flowers like violet and spices like black truffle, black pepper and licorice. He is the main contributor in the Provence reds except in Bandol where Mourvèdre is King. 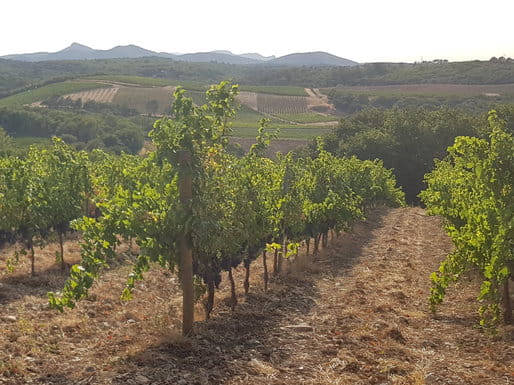 A Corsican and Sardinian grape at the origine, this truly mediterranean grape is very well adapted to Provence and Liguria. It is a vigorous grape sensitive to wind and powdery mildew with late maturing. It gives light and balanced fatty wines with a low acidity developing floral aromas (hawthorn, chamomile), fruit aromas: grapefruit, vine peach, fresh almond, pear, red apple. In Provence it can be combined with Ugni Blanc, Clairette, Sémillon or enter during fermentation in the vinification of rosés, up to 20%, to bring fatness, freshness and complexity. 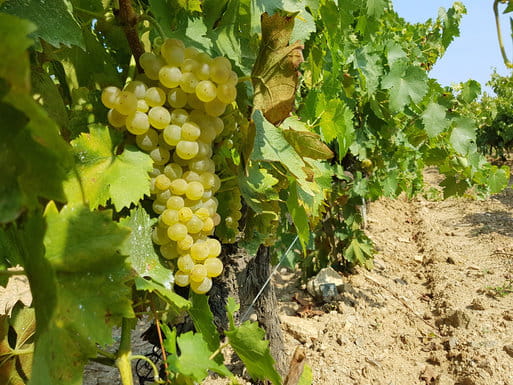